Supporters sharing their stories and pictures of
loving  & living with  senior  canines...

Supporters sharing their stories and pictures of
loving  & living with  senior  canines...

TO THE PAW PRINTS ON OUR HEARTS - A TRIBUTE TO LUCKY

Saying goodbye is never easy, particularly for the elderly and their devoted and loyal pet companions. Since being rescued from a kill shelter in Nebraska, Lucy (a shepherd mix) quickly became my mom's new life partner. Lucy and my mom, (Carmelita) happily remained together until my mom’s debilitating stroke forced Lucy to be re-homed. My mom never forgot about her Lucy and frequently spoke with Mikayla (her granddaughter) for updates. In spite of being a little slower and not as agile, my mom still had her “bucket list” which included things like a hot air balloon ride, among others.


All 'Couped' Up In Love

When you love dogs and give your time, money, or influence, you often hear heartbreaking stories. And there are so many of them. Sometimes, dogs and their humans magically find each other, and through that experience, they develop a life-long bond.

It was just a normal day volunteering at the capital area humane society with my mom. We were about to walk out the door when I saw this scared, cold, and broken little dog. I asked my mom if we could visit with just one more dog. Now, I've alsways had a quirk for weird or lonely dogs, but this one little dog was calling out to me. I just couldn't leave without meeting her. We opened the door to her kennel to find her lying on her cot and she stood up to see us. She didn't bark or try to escape. I think she was just happy that someone wanted to see the old weird looking dog. She was wearing a red sweater that hid her sad, mis-shaped back.

Our family members are retired service dogs. The oldest and first to be adopted is Binny, she will be 15 years of age this November 25th. You see, my daughter (Lindsey) lives with three other girls who were also blind.

Our love story began on Saturday, November 22, 2003. Only minutes after arriving at the breeders, a tiny 10-week-old Shitzu/Maltese puppy ran to my wife's open arms. We knew immediately this was our little 'Shit-Mal'.

From Loss To Love, My Heart Will Never Be The Same

There was a time in my canine 'mom' years that only Yorkies & Shih Tzus staked a claim in our home. Then no more than six weeks after the passing of my last 12-yr old furbaby and experienceing grief, it all changed.


My Best Friend and My True Buddy

My BFF was named Buddy. At age 11 1/2, he passed over the rainbow bridge on November 15. 2015, after a 2nd bout with cancer. We adopted Buddy from a local rescue when he was 3 1/2. Buddy was a beautiful red golden retriever, but that wasn't always his appearance.


A Tale of Happy Rescued Tails

All our babydogs have been rescues, that is, they have rescued us and enriched our lives far beyond anything we could have anticipated or deserved.
My husband and I served more than 20 years in the Army, moving constantly, deploying to faraway places, living life on the move. Throughout that time I made myself an oft-repeated promise: when I retire I’m going to have a dog! 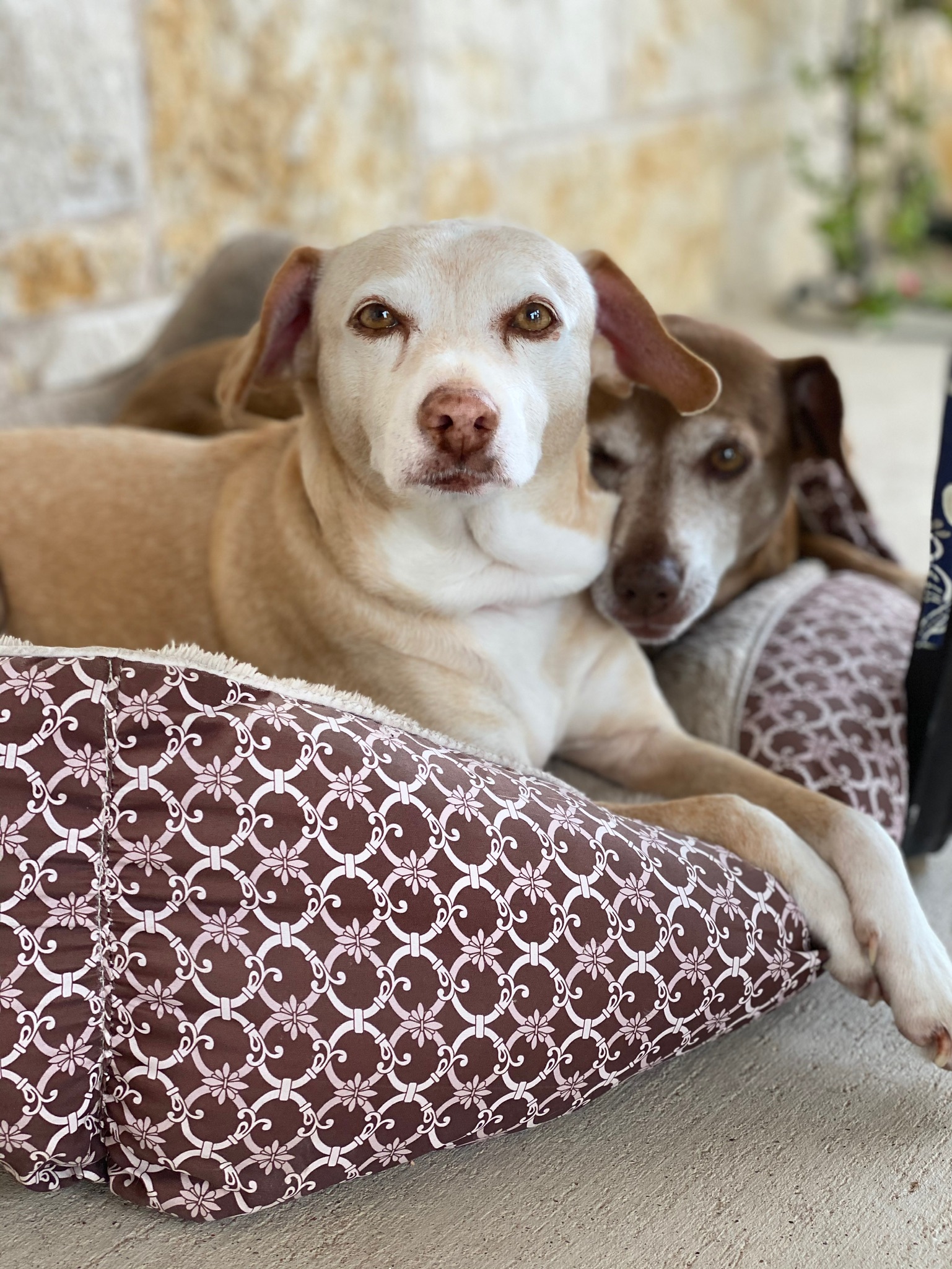 “Hey Mister, do you want some puppies?” they asked.

“No,” he replied as they insisted he hold one. “

That did it.” He came home two little Terrier-mix sisters. One was a light colored “fawn” and the other was darker “like cinnamon” and perfectly named them Sugar and Spice.

We all became attached in no time and they were a such a joy. “We each had our own puppy.” Sugar seemed to want to be with me and Spice became my husband’s shadow and knew every move he would make or be making.

Is it possible to experience love at first sight from a picture posted on Facebook? 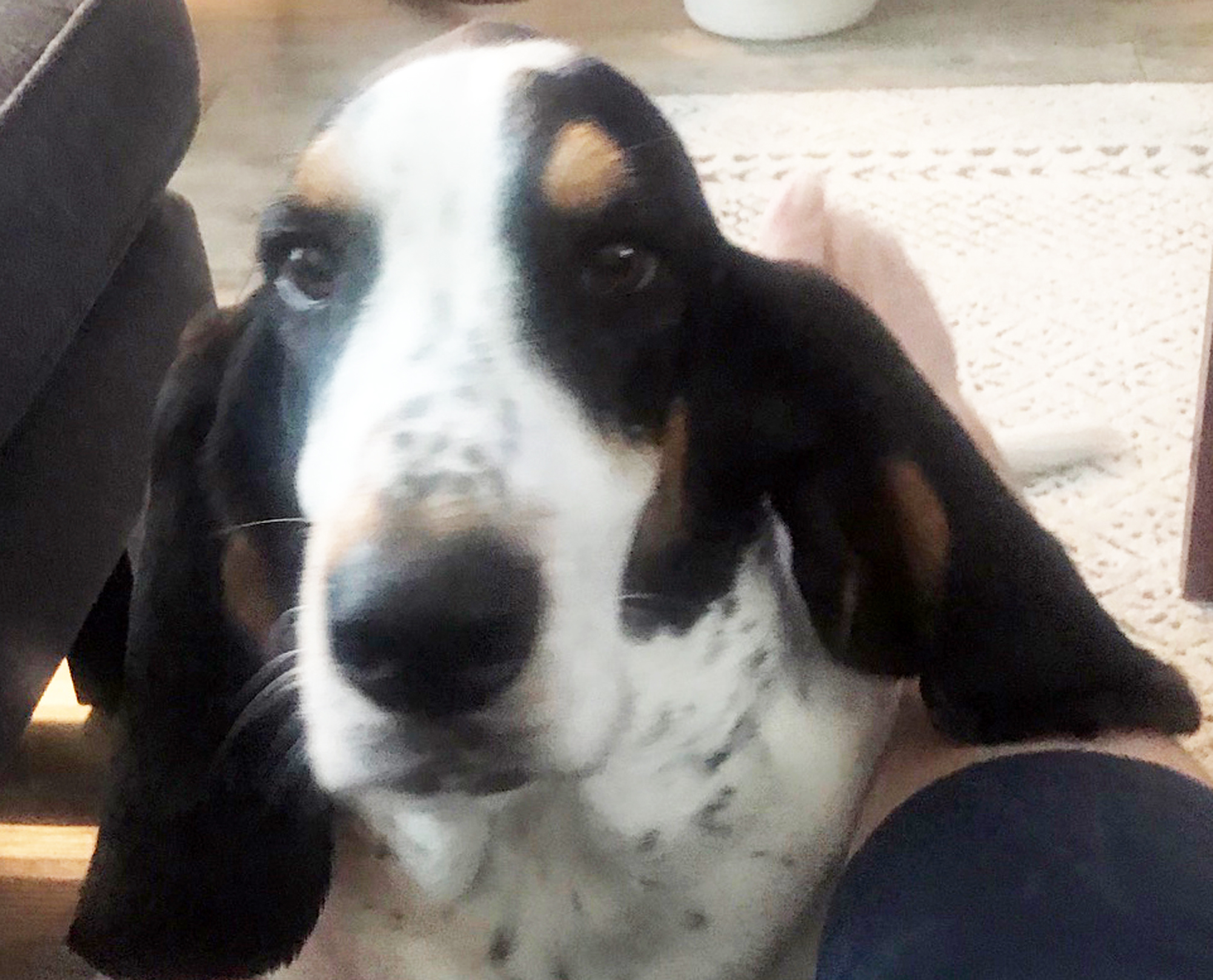 That's what happened to LGCR volunteer Beverly the first time she saw her Bassett Hound Louie’s “happy face” in a photo posted by a friend. “I knew the minute I saw his picture I was a goner.”

After about two years, the “poorly socialized” Louie had been surrendered back to his breeder, who had posted a request for someone to adopt him. “I must have been crazy because I already had a 13-year-old Basset Hound - Myrtle.” It wasn’t until about a week later that she and the breeder discovered his many “quirks,” but “I knew I just couldn’t give up on him.” Then, Myrtle passed away suddenly about four months after Louie arrived in their lives. “Louie helped me tremendously in grieving the loss of Myrtle. I didn’t have to come home to an empty house.”

Everyday Is A Holiday

I saw him across the room. Brown, shiny hair, big brown liquid eyes, silly smile, and what’s that — two girls hanging on to his every word! I didn’t have a chance. But my husband encouraged me to go meet him; so bravely I took off. One step and then another, and soon I had traversed the length of the room. He was in front of me. The girls looked at me and then at him and an unspoken word was uttered. All of a sudden I was holding this 23 pound, five month old, chocolate lab mix (emphasis on mix), who in one swift movement looked up at me with those eyes (oh, those eyes!) and gave me a big, sloppy lick — and then another — and then another. I was a goner!

The rescue organization sponsoring this adoption was quick to help us make him our own. And because of a sappy old Hallmark movie, his name became Krismas. By the way, we later adopted Eve!

Cody Is My Name & Love Is My Game

If Only Dogs Could Talk

I’ll bet you thought ears were for hearing, right? Well, that’s not always true. My new mom took one look at my ears and fell in love with me. Yep! From the tip of my ears down to the end of my tail, she made me hers.

I was growing old with my folks, living life in love and contentment. Then things started to change. My dad passed away, then it was just my mom and me. Mom loved me very much, and we had long talks each day. She missed my dad, and so did I.